A walk in early June 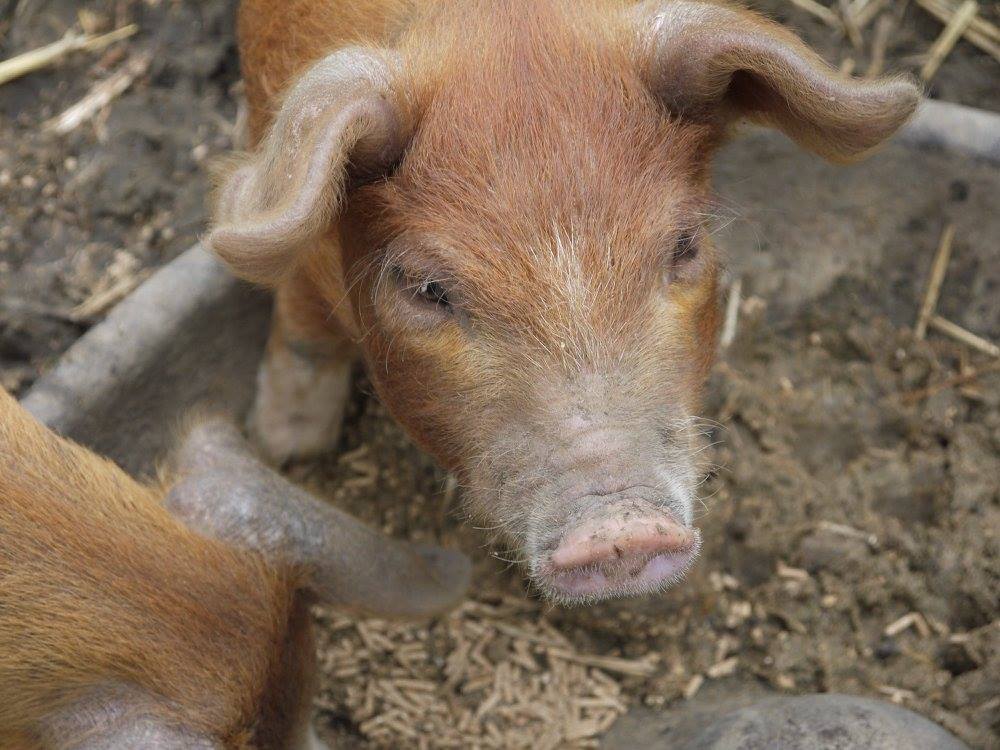 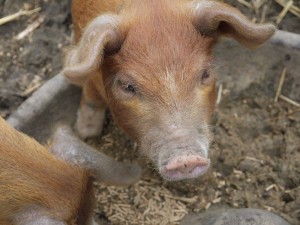 When I arrived in Hollington in early June, Mischief & Cheeky (the pigs), were enjoying fresh cuttings from the scything of the ride. They particularly liked the doc leaves, Rumex crispus, choosing them over their ‘piggy’ pellets. They really are quite adorable and settled into their new home very well.

Moving on from Mischief and Cheeky we stopped to look at a twayblade orchid, Neottia ovata. Flowering between May and July, instead of the usual striking orchid colours, it has tiny yellow green flowers which blend into the field layer making it easy to miss. It prefers damp woodland and although common, is absent from 30% of its historical range, thought to be mainly due to habitat loss. Philip is only aware of 2 twayblades in Hollington and has never seen one outside the wood. This could be due to it’s colouring, or as Philip has a keen eye, perhaps it’s threatened locally. I’ll look further into that later. The flowers which really do quite resemble a small person (my poor photography doesn’t show this) are so tiny they can only be pollinated by small insects. The scent attracts parasitic wasps, small sawflies and beetles. 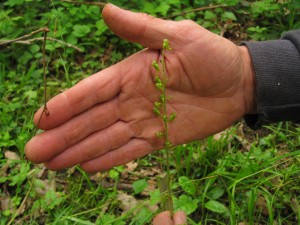 Veering ‘off piste’ a little as I do; it’s believed Darwin first began to doubt his Christian faith as a result of his research into parasitic wasps. He found it difficult to accept a God would create any species specifically to feed off the living larva of another. Once hatched, the eggs laid within the host (often a caterpillar or aphid), eat the host alive, eventually bursting out of the hosts body. 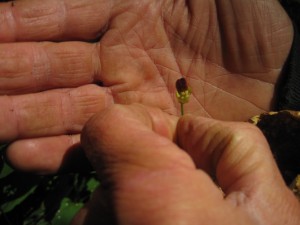 Moving on we spotted the common figwort, Scrophularia nodosa. This is a perennial that grows to about 60cm in height, on open shady woodland, preferring damp ground. It can often be found beside water, along hedge banks and on waste ground (I’m digressing again – but waste ground can be full of biodiversity and is often home to rare species as it’s generally left undisturbed for long periods of time). The common figwort flowers are greenish, approximately 1cm long, with a purplish brown upper lip attracting bumblebees and honey bees for its nectar and pollen. It’s quite a pretty flower but (again) this isn’t terribly clear from my photograph. 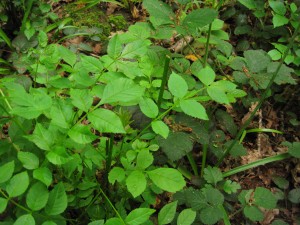 As we walked through Hollington it was difficult not to notice the serious damage caused by deer browsing on the new growth of coppiced trees. If you look closely at the photograph you can see the nibbled new shoots of ash, Fraxinus excelsior although hazel, Corylus avellana is their favourite. The common deer in Hollington is the non-native Muntjac, Muntiacus reevesi. Although populations of deer are localised, overgrazing can (and does) kill coppiced trees. Deer populations across the country are the highest they’ve been for 1000 years and expected to increase further. This can be detrimental to both the deer and biodiversity. Oliver Rackham, a well known ecologist of British woodlands, once said “a wood is happy with no deer”. However, a moderate level of grazing and trampling improves and maintains biodiversity but excessive levels are very damaging. Deer can also destroy shrubs and bramble in woodlands reducing suitable nest sites for birds such as the nightingale, Luscinia megarhynchos, and affecting the habitat of mammals. Over grazing also results in reduced habitat for invertebrates which are often the diet for chicks. These issues have been partially linked to the decline in woodland birds.

So until next time –  ciao